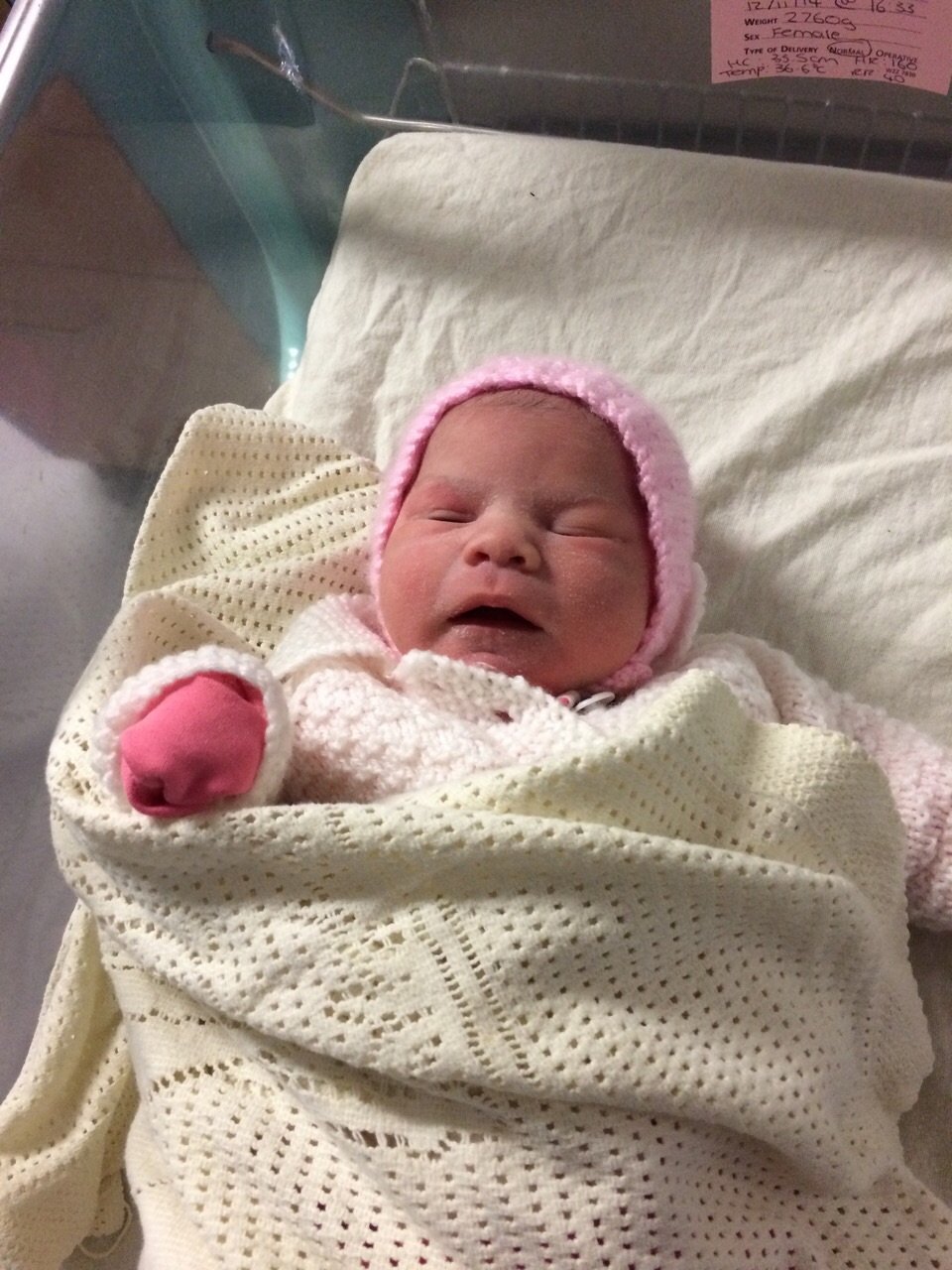 Well life was plodding along nicely being a mummy of 1 little miracle princess was amazing. So fast forward a few years and March 2014…..I got that familiar feeling, and I was late so I decided I needed to buy a test,sure enough it was completely positive……we were excited but I must admit the overwhelming feelings of anxiety came flooding back. I was given an early scan to check all was good and due to all the issues in my pregnancy with Megan. I had to have my pessary ring removed at 14weeks as the prolapse was fine during pregnancy. During the early stages was when we had megans DDH diagnosis so that was stressful. (See my previous posts on megans journey)

I really panicked that history would repeat itself and I’d be in for another rough ride. But my consultant quickly put me on daily blood thinning injections to prevent clogs and I had a few extra scans due to megan being early and so small. Also with all previous issues it was decided if I hadn’t gone into labour by 38weeks I was to be induced. At 20weeks we decided we wanted to know the sex this time round,although I had the same feeling I’d had with Megan, I knew we were expecting another girl and sure enough I was right. So from then on till she arrived she was always going to be Georgie May. So time went on and no issues I slept on a camp bed in hospital with Megan when she had her operation that was for a week at a time. And second time round i was at 31weeks so wasn’t exactly comfortable but I got through it.

So at 33weeks I think it was we went in for a check up and a scan. Little monkey was breach so I had to go through the excruciating turning process which felt like they we’re pushing her out. And I was rebooked for a fortnights time to check she was still engaged. But as thought I went in at 36weeks alittle panicked as at this stage I went into labour with Megan. All was fine but she was breach again and she had to again be turned. This time my consultant said she’d see me in a week because she may well turn again and if that happened it was likely i would need to stay in.

During all this hubby had also had a knee op so was on crutches, so Novemeber 12th arrived we took all our bags as requested and took a taxi to the hospital along with Megan to see my consultant and be scanned to see where we were at. I was 37weeks exactly, I had my scan and fantastic news little lady was engaged and ready to go any time. So then came the news my consultant was due to go to a conference in London that weekend so she decided to be safe she’d check me over because if I was to go into labour over the weekend and there was issues she wasn’t there.

So nerves heightened i awaited the internal exam, then came the words ‘your not going home’ Argh scary, she told me I was already 3cm dilated and I was being moved to delivery and they would attempt breaking my waters which turned out really easy. I had to call my mum to come and take Megan home with her and my stepdad. As they broke my waters at 9.30am which meant one of two things…..nothing may happen for ages or it could all progress very quickly.

By 10.30am Megan had been collected and I was checked but I wasn’t any further on anď I wasn’t getting twinges at all. So the decision was made to have a canula fitted into my hand and given meds to move it all along. I must admit I felt alot more in control this time round. Although having the canula was a nightmare the midwife couldn’t do it due to my awkward veins so they called in a doctor who was extremely sweet but she also had issues but after a few tries she managed to get it in and then started my low dose of meds. Must have been an hour or so after I was checked and still nothing. My lovely gynacologist friend even popped in and ordered the lovely student midwife in the room with me not to leave me under any circumstances as things could change very quickly. LOL! Of course it hadn’t so meds were uped which eventually began to work…
Yay contractions,wasn’t long before i needed gas and air…….things went slow & steady to start with but gradually increased in intensity. And around 4.30pm in the afternoon I gave birth to a healthy baby girl all 6lb 1oz of her. Into the world came Georgie May, I had a few after birth issues but nothing serious we were moved down to the postnatal ward and Georgie had a few issues with jaundice but nothing to worrying. I just couldn’t wait for my babies to meet.

Our girls met for the first time 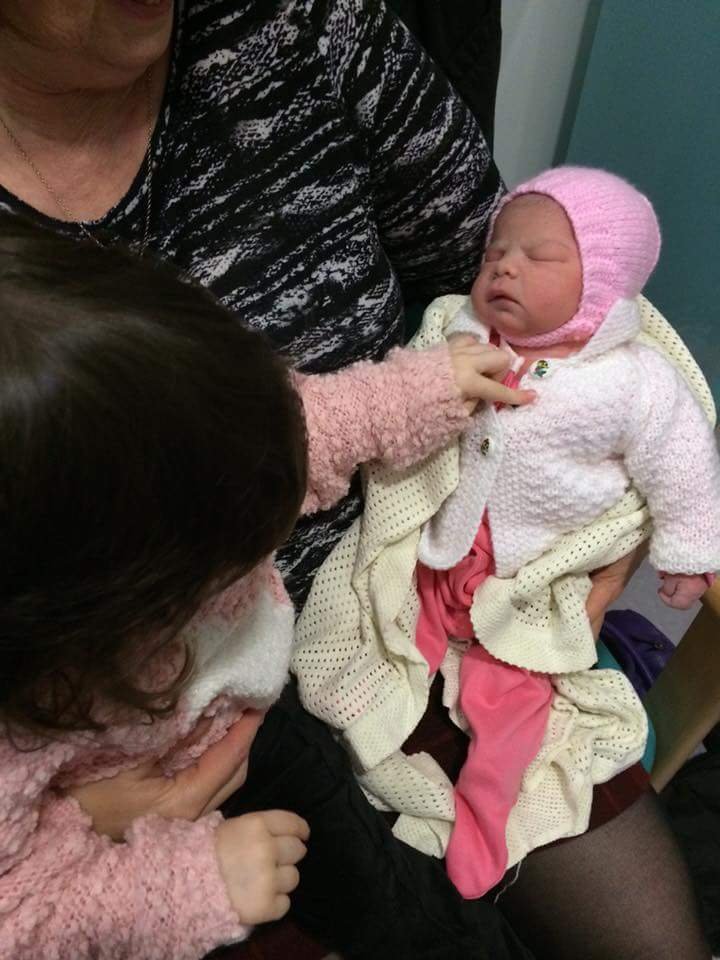 So I think I’ve probably waffled on quite enough for this one. Thank you for reading…..

I’d be happy to hear your thoughts on what you’d like to see on this blog. Few more ideas in the pipeline.

Oh yes, we were warned it would happen yet there’s still many people not listening which is so dam scary. If the disregard continues we will end up in a full lockdown! Being in lockdown is scary and difficult to…

So for many years I have suffered with a dermatological condition known as psoriasis, I have often suffered small break outs on my face, hands and wrists which have always been controllable. I have been using a dermal cream soap…

We are finally in March and although its a hard month for me and I really struggle with it since losing my grandad 3 years ago, but I am pulling up my big girl pants so to speak as we…

I am Kayleigh, the writer behind Mama to Moomin and Bear, I am Mummy to Megan (Moomin) and Georgie (Bear), Wife to Ben, Fur Mama to 2 Rats (called Everest and Snowflake) and 2 dogs (named Bo and Tiger).

You can find out more about which cookies we are using or switch them off in settings.

This website uses cookies so that we can provide you with the best user experience possible. Cookie information is stored in your browser and performs functions such as recognising you when you return to our website and helping our team to understand which sections of the website you find most interesting and useful.

Strictly Necessary Cookie should be enabled at all times so that we can save your preferences for cookie settings.

If you disable this cookie, we will not be able to save your preferences. This means that every time you visit this website you will need to enable or disable cookies again.

This website uses Google Analytics to collect anonymous information such as the number of visitors to the site, and the most popular pages.

Please enable Strictly Necessary Cookies first so that we can save your preferences!